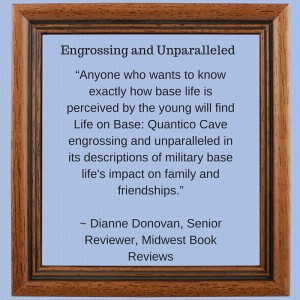 numerous awards in the US and UK.

LIFE ON BASE: QUANTICO CAVE

LIFE ON BASE: Quantico Cave

As the child of a United States Marine, I grew up in ways most American’s will never have the opportunity to experience.

The difference is in the details. We looked both ways before crossing a tank path in the woods and collected spent bullet casings in the long abandoned trenches. We waved to the MP’s, not the police, and our parents shopped at the commissary and PX, not the grocery store and department store. When playing sports, we stopped mid-stride at the sound of the evening trumpet call and stood at attention while the flag was retired. Then there was the rare time out as a helicopter landed in the middle of the ball field.

Life On Base is a new series written about life as seen through the eyes of military children so they may share their world with the other 99.5% of America.

For Stephen, his life on base is much the same as most other children’s. The difference is in the details. Look both ways before crossing a tank path and be sure to check if the spent bullet casings you find in the long-abandoned trenches are actually empty. Sports stop at the sound of the evening trumpet call as he and his friends stand at attention while the flag is retired. Quantico Cave is a story of friendship and competition, and when Stephen meets up with a friend he once knew at a previous home station, the contest hits a whole new level that places everyone at risk. 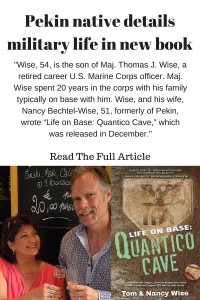 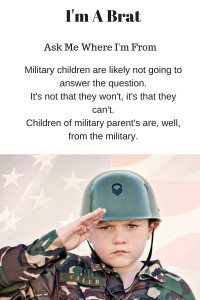 Jack Magnus, Readers Favorite – The paintball gun battle was quite reminiscent of Lord of the Flies and was filled with the tension of battle, a war game played by kids who’ve been indoctrinated into a culture that extols success in spite of pain.

Dianne Donovan, Senior Reviewer, Midwest Book Reviews – Life on Base: Quantico Cave is first in a projected series of middle school books and introduces Stephen, whose life on a military base is presented in exact detail. While many novels introduce the themes of ‘army brats’ interacting with their peers, few actually take the time to reveal base life itself, with all the uncertainties and altered realities that it brings.

Anyone who wants to know exactly how base life is perceived by the young will find Life on Base: Quantico Cave engrossing and unparalleled in its descriptions of military base life’s impact on family and friendships.

Nina Longfield, Luxury Reading – For a child growing up on a military base, life is different from that of the outside “ordinary” world. The children follow order and rank just as their military serving parent or guardian does. Authors Tom and Nancy Wise show this unique military up bring in their highly readable and engaging middle grade novel Life On Base: Quantico Cave.

I found Life On Base an enjoyable read. I was not brought up on a military base, but I get a sense of that childhood lifestyle from the Wise’s likeable novel. I liked Stephen as the narrator. His sense of determination became clear as the story progressed. Stephen’s resolve and attempts to mend old friendships gave the novel a satisfying feel from beginning to end. 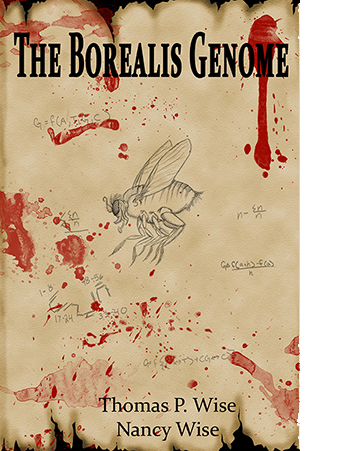 Read A Sample Of The Borealis Genome
Buy Now

Can our consciousness and sense of self endure beyond our physical bodies? As technology evolves can mental immortality become a reality?

These are two of the major questions raised by married authors Thomas P. and Nancy Wise in their new novel The Borealis Genome. Advances in genetic engineering combine with artificial intelligence to create a disturbing world where the minds of the few control those of the masses.

The creation of a weaponized virus allows individuals to upload their minds into the bodies of others creating an army of mental zombies. Tim and Nora must find the source of this technology and destroy it before their world completely unravels.

I liked the fly. If you think back, flies are a big part of horror movies, and they go well with the irritating sound of trouble approaching. Remember the flies on the window of the Amityville Horror? We heard the flies, then saw the flies and the music starts. In stories, whether books or movies, when flies are present trouble is not far away.

The Borealis Genome is far from a horror story. We don’t consider it to be in the same category of horror since there really is nothing horrible about it. What I wanted, was to signal trouble and flies signal trouble. Flies also carry disease.

I found the flies to be intriguing. Check out this excerpt:

Tommy’s mouth opened as if to protest, and was stopped once again by the bony hand in the air.
“Apocephalus Borealis,” Mr. Oldham said slowly.
“The bees,” Tommy said quickly to show he was listening.
“The Flies,” he was gently corrected. “They infect the bees,” Mr. Oldham started. “The flies transfer a virus when the females inject their eggs, and the bees simply comply, bearing the fly’s larvae until they are consumed by their burden.
Tommy’s look of disgust and amazement was all that was needed.
Very strange,” Mr. Oldham said shaking his head as if he too had trouble understanding the relationship. “Why would any creature take on such a burden without a fight?” Mr. Oldham allowed the question hang in the air. To Tommy, it seemed the question was not his to answer

Our premise for The Borealis Genome (TBG):
Speculative fiction is a great form of science fiction. It’s fun. It’s imaginative in a way that takes the reader far beyond building new worlds and new technologies. I’m not dissing the true sci-fi authors. Science fiction has played an essential role for years. If not for science fiction I believe society would suffer a drought in technological discovery that would set us back centuries.

But speculative fiction is just plain creepy. It is really creepy. Speculative fiction is the art of taking reality and asking ourselves, “What if?” In TBG we ask you to follow the “What if” question down a path that horror writers have taken over and over. Zombies fill our evenings and weekends with walking corpses that drag their legs and drip flesh and blood as the virus seeks a new host. Most of the time they seem to stand about, listening for signs of life, or perhaps move in packs, groaning and decaying as they seek new recruits. For some reason their victims stagger and stumble about as if they have themselves never seen a zombie movie and blunder into the arms of the corpse.

TBG takes a fresh look at the world of zombies. What if it was possible to really make a zombie? What if they could create a designer zombie that would do whatever they wanted it to do? What if zombies were real and scientists have learned to harness the power of mind control in a way that allows them to build super knowledge?

Now I know this sounds crazy. Right? Consider that a tremendous amount of the medications we take every day are synthesized from nature. For that matter, as Ji, Li, and Zhang (2009) point out, humanity has been using products from nature for medicinal purposes throughout our history. In fact, we have only begun to scratch the surface when it comes to the power of nature.

So now, back to the question of zombies.Zombies are everywhere in nature. Bees, wasps, snails, caterpillars, ants and yes even humans have been infected with viruses and parasites that take over brain functions to force the will of the host to bend to the will of another.   Even psychiatric disorders that make people believe that they don’t exist, although they still know who they are.In TBG we ask the question, if science were ever able to harness the power of nature’s zombies, what could society do with the knowledge? Dr. Oldham begins quite innocently with an attempt to cure his fiancé of a deadly disease, and in the process discovers he can cure Alzheimer’s. As the cure progresses, the power of the cure is weaponized by government agents.