Where Are You From?

When someone asks you where you are from most people will answer without hesitation. So, where are you from is a simple question? Where we lived during our formative years, generally considered to be the tweens through early adulthood, significantly influences the language we use and the values we hold dear. Psychologists tend to define these years as anywhere from early childhood up to age twelve while others believe these years to include up to age eighteen. Where ever you end this development stage in your beliefs, the regional culture has an effect on personal expression.

For A BRAT, It’s Complicated

For the military child, traditionally known by the acronym BRAT, “where are you from” is a very complicated and baffling question. BRAT’s, or 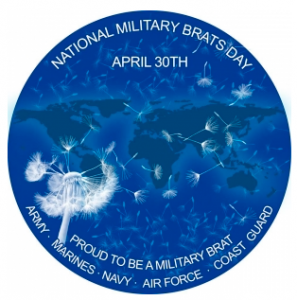 more currently referred to a Third Culture Children, will often hesitate and ponder their answer before launching into a long explanation of military life. These children are raised in a culture separated from regional norms and consider the military as a place of residence.

Military BRAT Life provided a quote from David Morehouse that expresses the life of a BRAT rather well. “I spent my childhood in the army; I was a young nomad, traveling from post to post with my family.  I knew nothing of life except what a soldier and a soldier’s wife taught me, and I never consciously expected to be anything but a soldier.”

April is BRAT month, a time to consider and appreciate America’s Third Culture Children. Take a moment to follow this link and understand the culture of a BRAT this April.

BRAT – Where Are You From?
Copyright © 2023 Author Thomas P Wise