I remember sitting on the couch with my father, a veteran of foreign wars, a Marine, a great American, and watching that little black and white television. We didn’t have an antenna. Our TV had a set of the old rabbit ears. My job was to jump and run to the set and gently, slowly move one of the ears if the channel drifted. My father sat in his armchair and me; I sat cross-legged on the rug, front and center of the TV. I would smack the floor with my hand and re-tune the TV set if the picture wavered. Loose tubes was a constant problem in those days.

The Greatest Can Float 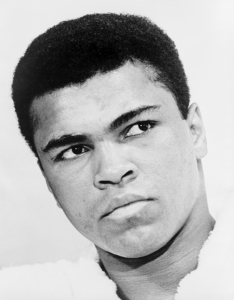 We sat there together and experienced The Greatest of All Time. I thought as a child that he actually did float. No one could touch him. He took a punch to the head only because he let his opponent hit him. “I don’t get it,” I would say. I’d shake my head and look at Dad. “Why?”
“It messes with his head,” Dad always told me with a chuckle. Of course, he was talking about Ali’s opponent.
Watching Muhammad Ali was always a blast. I loved to listen to him egg on his opponent in the run-up to the fight. He was never disrespectful or violent. It was just clean, good fun. When Joe Frazier beat Ali, it was devastating. That loss was a punch to the gut.

Ali was one of my heroes, one of very few alongside John Wayne and my father, and heroes don’t lose, so I thought. Ali taught us all that real heroes may lose, but they don’t quit, they fight and keep fighting.  Such as sad day for America.
Muhammad Ali, January 17 1942 – June 3, 2016.