Last week we talked about the likelihood of robots turning on humanity through the vulnerability of Artificial Intelligence (AI) to mimic human weakness. See Robots – How Fast Will They Turn On Humankind. Now we see the release of a new scientific discovery, shape-shifting metals. Remember the liquid metal Terminator, able to shape shift and become anything necessary to complete the mission? Well someone at Cornell University did.

Scientists at Cornell University, as reported by Science Daily, recently announced a hybrid material, soft like rubber, yet hard like metal. A combination of silicone foam and Field’s metal, the product was described by Shepherd, of Cornell University, in Science Daily as having the ability to shape and reshape like an octopus. So what can we do with shape-shifting metals?

Let’s imagine a robot we call GLIDE, short for Geosynchronous Launch Independent Defense Emergency system, is capable of reshaping for optimum energy efficiency, communication reception, threat detection, targeting, and self-defense. Our robots were deployed in a network, hovering above the earth, hurtling through space at 3000 meters per second, watching over our lives and resources. Patiently waiting and listening to communication traffic, GLIDE catalogs information and learns, evolving, building a threat matrix, and reshaping priorities based on human desire.

Can anyone say Judgment Day? 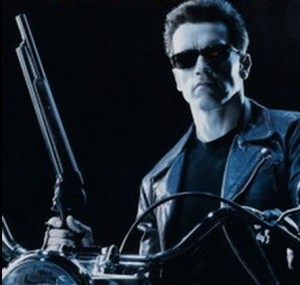 GLIDE constructs a bleak picture of the future and a plan emerges. It learns to shape itself into a self-replication and weapons manufacturer, building from particulate materials it gathers in space. GLIDE designs a distribution system for optimal specialization, creating a vast weapons development program. Then, in the midst the political turmoil, terror attacks, and saber rattling below, it launches simultaneous strikes across the globe for our own good, of course.