Families have waited for their military family members to return for thousands of years. Often, the family will follow to far away places, serving with their service members to ensure the soldier has all that they need to fulfill the duties of the deployment. During the service member’s deployment, these families will often struggle to make ends meet. And at times, the family is changed as much as the soldier or sailor. Remember the scene in the Gladiator when he returns home to find his wife has died?

For Thousands Of Years Families Traveled With The Military 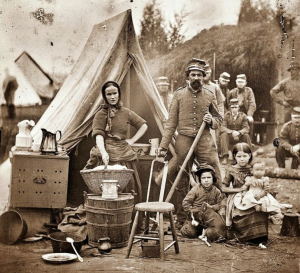 In the past, the family was expected to travel and provide the necessities of food and clothing. In the Bible, David was sent to his brothers fighting the Philistine army to provide food. In America, during the Civil War, families often traveled with their soldiers. And today, spouses and children will live in far away bases and forts during an overseas tour. The term BRAT (British Regiment Attached Traveler) was created to identify the traveling family members of the British Military.

Military Families Are Part Of The Culture

The military embeds the family in the culture. Children and spouses learn many of the skills of the military. Children learn to handle firearms, both to ensure their safety as well as to shoot. Remember the scene in 300 where the father, King, is teaching his son skills in wrestling and swordsmanship? Life for the offspring of the military is no different today. Just as with modern professionals and trades-people, the parents teach the skills of their trade to their children, readying them to follow in their footsteps.

The tag BRAT stuck and today the children of the military keep that name with pride and affection. Have you ever met a BRAT? April is Military BRAT month. Learn more about America’s Third Culture in Life On Base: Quantico Cave.