My true and sincere apology—Crazy isn’t a good or fair thing to say.

So many of us struggle with health issues such as this.

But, seriously—Are You Hearing Voices?

Anyone remember Flip Wilson, the late American comedian from the 1960s and ’70s. He was hilarious, cracking jokes and then finishing with a wide-eyed grin and his famous tag line, “The devil made me do it.” No matter what happened, and while it was funny, it wasn’t his fault. He was hearing the wrong voice.

The Mental Health Foundation in the UK defines hearing voices as an “Auditory Hallucination that may or may not be associated with a mental health condition” (2019). The foundation continues, stating the condition is difficult to explain, particularly if you have never experienced hearing voices in your head. One person may describe the event as hearing someone standing right next to them, and others say it is a voice in their head. According to the article, most people have had at least one experience of hearing voices, but of course, it could be that they won’t admit it after people hear of the first episode.

But, now for the good news—we’re supposed to hear voices in our heads.

So it was, when Elijah heard it, that he wrapped his face in his mantle and went out and stood in the entrance of the cave. Suddenly a voice came to him, and said, “What are you doing here, Elijah?” (1 Kings 19:11-13)

The real problem becomes, why aren’t you hearing voices? Or, are you, but you aren’t listening to the right voice? Samuel, a prophet of God, struggled to understand that the voice he heard was God, speaking to him and waking him from his sleep (1 Samuel 3). It wasn’t until he was told to stop and be still, wait for the Lord to finish speaking before he understood that God was calling him.

We have so many v 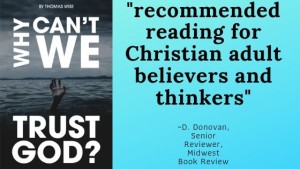 oices in our heads today, making it difficult to discern the sound of God from the noise. God is forced to compete with the television, phones and smart-phones, radio, and of course the voice of Satan urging us to misbehave. If you can’t hear God’s voice among the sounds of life, make it a habit to unplug at least once a day, to be still, and wait, enjoying the silence so you can hear God’s still, small voice in your life.